Our club was all male from December 1956 until March 1994. Nancy Vaughn, daughter of club president, Bud Vaughn. joined our club March, 1994; Beth Dick, daughter of club secretary, Larry Dick, joined in January, 1997; Vi Kelley joined, with husband Roy, in November 1997. We currently have 19 females on our roster (out of 36 total).

Our first female officer holder was in 2001-2002 when Lucy Greene was our secretary. Kay Pegram in 2003-2004 was our first female president. Phyllis Shifflette, (2006) became our second female to hold that office, Nancy Ratledge, Kay Pegram, Pattie Ward Miller and Jan Johnston has also held the office.

Horseshow:
This year will be our 44th annual Horseshow.Our first show was in August, 1970. Club members Clarence Knight & Shube Clark were responsible for bringing the Show to our club. Charlie Frye was Show Manager for most of those years with Kay Pegram being Show Manager for the last three years.

Our one-day horseshow is approved by the American Quarter Horse Association. They arrange for the judges to be brought in as well as a secretary to keep the records for the association. Many times our Show has received a “perfect 10” score from the judges.

The community and business community are the major sources of support for our show purchasing ads in our Program Book with ad sales now totaling over $537,000.

Turkey Shoot:
30  conscecutive years (as of 2010)(We are taking a break to find a new location - the landlady of our leased property, sold the lot).Garth Payne was the club member who brought the Turkey Shoot to our club. After visiting several other Shoots, primarily the one at Summer, he convinced our club to start the project in 1979. Our first location was on the airport property and our first year the profit was $500. After being on the airport location for several years, we have moved four times over the years as “civilization” has encroached upon us. Currently our Shoot location is on Marshall-Smith Road where we have been for a number of years.

This project has consistently been our largest fund raiser. Our net profit is between $11,000 to $15,000 per year. It is also the project which has generated a lot of man hours and camaraderie. The Shoot runs for 13 weeks in the fall from September to early December.The Turkey Shoot has evolved into much more of a family, co-ed affair. Now many families come out to shoot as well as younger guys and gals with their dates. This is a very healthy situation and makes for much more of a friendly atmosphere. All that equals many more shooters.

Claxton Fruit Cakes:
We have our cakes in only two stores. We normally sold 2000 pounds when we had 15 stores.

TNT Fireworks:
Our first year was 2005. We had a net profit on $3200 in 2005 and $4000 in 2006. The project ran 9 days and we had the more club members working on this project that any other. It was intriguing and enjoyable. Due to the manpower requirements we discontinued the project after 2007.

Some Important Facts about our club and members:

Some of the charitable causes supported by our fund raising projects:

List of Civitan Clubs we have sponsored over the years: 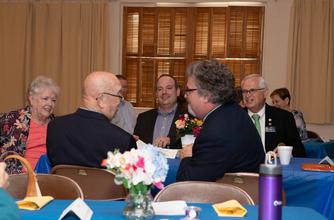 3 Past Civitan International Past Presidents visited our club on May 2, 2109: Horace Davis with back to camera facing Duane Capps, also back to camer, Joe Parker to Duane's right.

We changed our name to more accurately reflect the make-up of our membership. We are now the Guilford College Community Civitan Club.

During this name-change process, we received copies of the actual handwritten application forms the 65 charter members filled out to join Civitan.

Membership numbers: We started with 65 and now have 32 members. Answer to a trivia question as to how many members do we average losing each year? The answer is 2 ½.. We have to keep recruiting!

One Charter Member is still on our membership role as of May,2019

Our club was founded December 15, 1956 with 65 members. The sponsoring club was the Hamilton Lakes Civitan Club. The ceremony was held in the Guilford High School Cafeteria. Harold Williams was our Charter president.

Luther Medlin, President of Civitan International, was the keynote speaker. He told the members “Membership in Civitan International is a challenge to service and the club is not merely a social organization but one devoted to civic service. You must be builders of good citizenship and must live up to the Civitan Creed, which is a challenge to service”.

We held our 50th Anniversary on Monday, December 8, 2016 at Lindley Park Baptist Church with 60 in attendance. 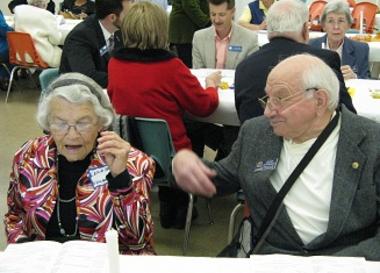 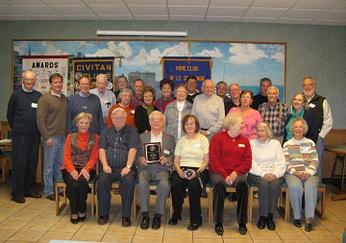